Boy I Tell Ya

Body movement, learning and relearning how to move the body is never going to end. At least that's what it seems like. I just attended the workshop Sandy Sommer RKC put together that Doc Cheng led. It was AWESOME. I am in no way one to say that I am a master at any of the kettlebell moves. Some may argue differently, but really, I pretty much tweaked every single aspect of every single thing I do with a kettlebell in one day. The first 4 hours of the workshop we were working on squat patterning. Definitely one of the most, if not THE most important aspect to get down before progressing with weight. That's right. Before weight. We really didn't touch a bell that much. Why not learn to move your body first before you add resistance? Yeah, sounds like a good idea.

So four hours eh? Yeah. 4. It was not boring. Not in the slightest. I relearned how to engage my body properly with first the 3 pries and then the remaining aspects of the hard style lock. Throw in the bretzle (thanks to Gray Cook), and there was indeed some tweaking there as well, and you've got yourself a rock solid linked body ready to move (hopefully). I know the soreness I am feeling today is from this portion, and again, we were not using bells for most of this.... RECRUIT FOLKS! Muscles that is...and watch how much work you can accomplish.

Another gem of info was the idea of the core as a can. It has a top and a bottom. We all have a diaphragm and a pelvic floor. Do you use them? Do you know what crocodile breathing is? Well, I do now.

Next was the get-up. A large time was devoted to this as well. And rightfully so. It is an amazing movement. Stability, mobility and a part of almost every one of the 7 tests in the FMS screen (if not all of them). Doc's version is the RKC standard. How lucky we all were to get his first hand instruction.

Later we worked, tweaked and rocked out on the swing, clean, pistol, bent press and the jerk!!! F yeah!

As a bodyworker and a graduate of a Kinesiology program I have a fair background in the body and it's workings. I also attended the RKC and CK-FMS. These two, after competing in power lifting, oly lifting and kettlebell sport. You would think that I have a pretty good grasp on things. Well, I do, but there is always more. And more and more and more.

Thank you Doc. I learned so much valuable information.

This weekend is the RKC II. I was originally planning on attending. I'm on the boat for next year. One of the crispiest noodles I know, Willy Will SR RKC will be there. I'll still get to reap the benefits when he returns to train little ol Jen.

Check out some pics
Posted by abadasshippie at 12:28 PM 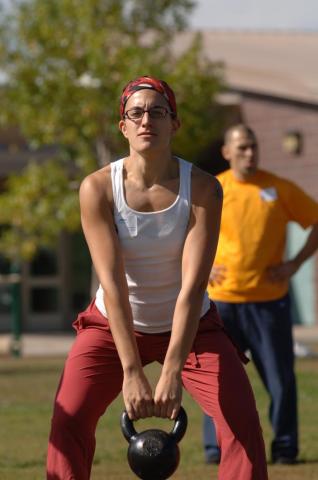